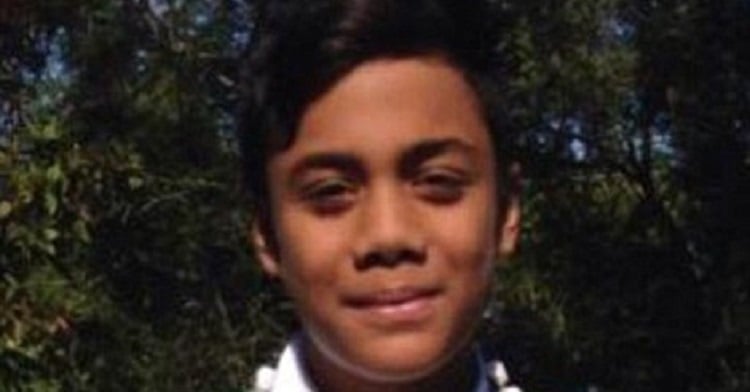 Teen Tuipulotu ‘Tui’ Gallaher told a rescuer ‘take my cousin first’ after the pair became caught in a rip during a night swim at Maroubra Beach in Sydney just two days after Christmas.

When the rescuer returned, Tui had disappeared, his body found three days later after an exhaustive search.

Aunt Nipa Makoni says Tui and cousin George, both 14, went out for one last swim after a family day at the beach when they got into trouble.

He was yesterday laid to rest at Waterway Chapel at Rookwood Cemetery, surrounded by family, friends and schoolmates.

Minister Tim Booker at Guildford Anglican Church, the family's local parish, spoke of Tui as being "unique among teenage boys" because he was "organised". He praised Tui's family for being on time for the funeral, saying, "This is not a Tongan funeral at all! Tui would have been impressed."

Over 100 mourners attended the funeral, many of them wearing t-shirts emblazoned with the words: 'Tears For Tui' and a smiling photo of the teen.

Power & Controversy: Will Alan Jones Be The Last Shock-Jock Giant?

His cousin George helped carry the casket in the pouring rain with Tiu's aunt saying the death will be with George "forever".

George posted a photo of himself with Tui at Maroubra Beach as the search continued, reading, "Keep fighting Pulotu’. Please Heavenly Father bring back Lotu back safe and that he’s alive." He accompanied the post with several hashtags including '#imsorrytui'.

Tui's mum, Sandra Tamano, who had collapsed on the beach during the search for her son told the memorial service she was trying to stop crying.

"On behalf of my son he would have said stop crying mum, everyone's looking at you," she said, reports the Daily Telegraph.

Family and friends told stories of Tui, of a boy who did everything for family, who was selfless and loving.

Father Soane Gallaher, his sister, aunt and school friends spoke about the teen, with his father saying, "This is not a sad story. This is the beginning of the healing. Today is a happy day. Tui is in a good place."

A Go Fund Me page has been set up to assist the family with funeral costs.