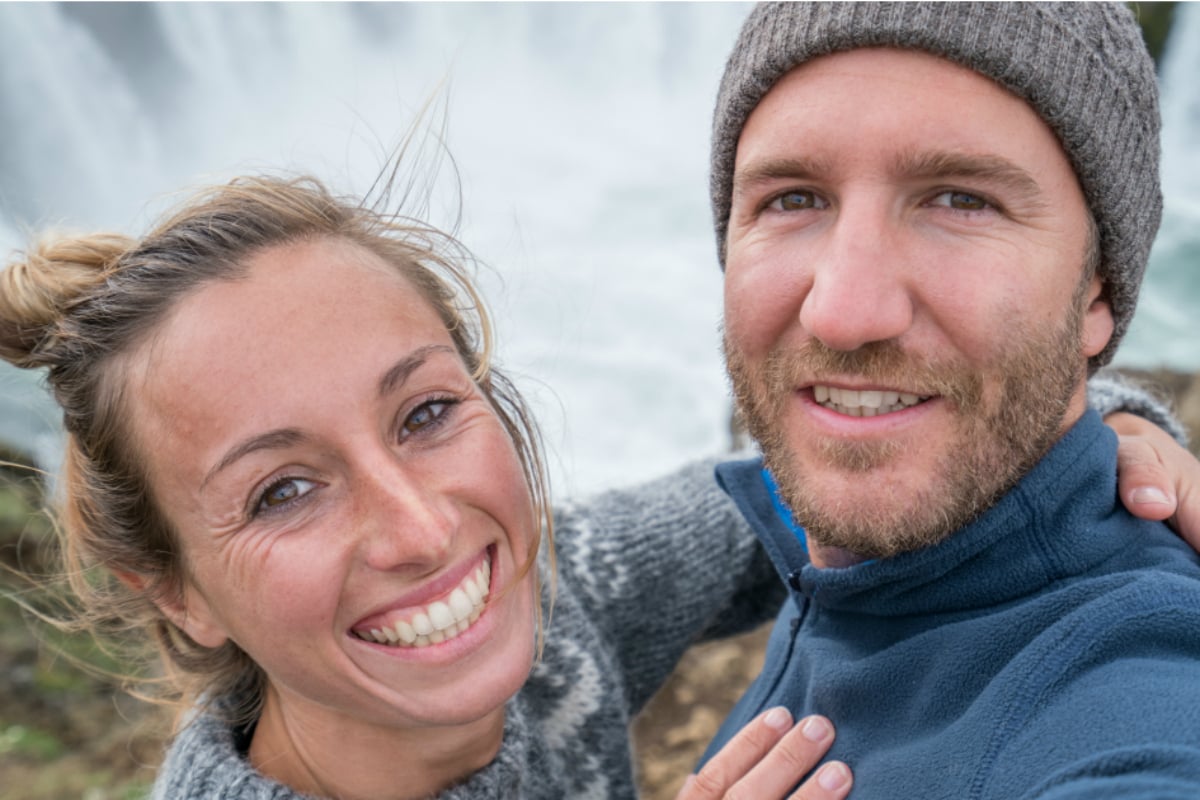 The image used is a stock photo.

I was no stranger to intact foreskin when I met my husband.

But his foreskin was different. He seemed to have more.

The first time I touched his cock, I didn’t notice anything unusual about it. Mostly, I just really liked what I touched and saw, and I felt flustered by the whole thing. I really liked him, and having him undo his pants for me confirmed that he liked me, too.

But after handling it a few times, I realised what was different. His foreskin didn’t just cover the head of the penis, it fit tightly over it. It wouldn’t retract, even when his cock was soft.

I didn’t think too much of it at first. Every dick is different, and this one was attached to someone I loved so I loved it, too.

Over time, I started seeing the ways it made our sex life a little unusual.

We asked Australia’s highest-paid escort Samantha X how to have better sex, and the answer is pretty, well, do-able. Post continues after video.

There was something exciting about dating a guy with phimosis.

Because the head of his penis was tucked away at all times, he wasn’t super sensitive to sexual stimulation. Getting an orgasm from penetration was never a problem because this guy could keep going and going without finishing. No matter how long it took me to come (and it didn’t take long at all), he could keep up and then some.

He outlasted me every time. I was in my early 20s and I had enough energy to go again and again. And I couldn’t think of a better blessing than a guy whose cock could handle it.

When the relationship got serious and we established a lot of trust between us, we stopped using condoms. Neither of us had any STIs and I was on the Pill. But even if I wasn’t, it wouldn’t have mattered. His tight foreskin meant he never got enough stimulation from sex to actually ejaculate. It was like his cock was covered in a permanent flesh condom.

After a while, though, those advantages also started to feel like downsides.

But I felt bad that no matter what I did to him, he never got to come. I enjoyed multiple orgasms when we fooled around, and he had to settle for none unless he finished himself off.

No one can accuse me of not trying. I stroked him for extended periods of time and kept going long after my arms and wrists became sore. I took him in my mouth longer than I’ve ever taken anyone. It hurt my jaw but I was determined to try my best to get him off. I fucked him and let him fuck me until I was completely worn out and exhausted.

It all ended with the same come-free anti-climax.

Over the course of the fifteen years we’ve been together, I brought him to orgasm exactly once. It was in our first year together and I pulled out all the stops.

I was really proud of making him come, but I was also kind of let down. It was an accomplishment, but one that I couldn’t sustain. It involved so much effort and physical discomfort that I knew I wouldn’t be able to do it regularly.

And I really felt like I was missing out. I really love watching him get off and listening to the way he grunts when he comes. But I’m only ever a spectator to it, never a participant.

He basically had to give himself ruined orgasms inside me.

It worked. We had four children using that method. But it sort of took the romance out of it.

Insecurities I didn’t know I had

I also had no idea that my partner’s phimosis would end up making me feel insecure.

I knew that his delayed ejaculation had nothing to do with me. Even when I wasn’t trying to make him come, he was still getting ample stimulation.

But that didn’t really help. I still felt like I was failing somehow.

I pride myself in being an extremely open and accommodating person when it comes to sex. But this just threw me for a loop somehow. No matter how often I told myself all the rational things (“It’s just a physical condition,” “Maybe he’s got death grip,” “You’re not doing anything wrong”) I still ended up with this discomfort about the whole thing.

The thing I’ve come to realise is that no one prepares you for delayed ejaculation, and definitely not for phimosis.

I expected there to be some orgasm mismatch in my relationships, but I always thought they’d go one way: my partner would come and I’d struggle.

Rachel Corbett, Samantha X and Dr. Lauren Rosewarne explore everything there is to know about the female orgasm on the Sealed Section podcast. Post continues after podcast.

I heard about premature ejaculation my whole life. I heard about dissatisfied women. I knew men could buy numbing creams to delay their ejaculation. But a guy taking forever to come, or not coming at all? I’m not sure anyone ever told me that was a thing.

So, it caught me off guard. And I didn’t know how to shake the feeling that I was bad at sex. That if I was good at sex, I would be able to make him come. Because what is good sex if not two people making each other come?

Fixing it while owning it

I did my best to accept it, but it took years to fully overcome my insecurities about my husband’s delayed ejaculation.

What helped me the most was addressing it directly with him and making space for long, open, and frank conversations about how I was feeling.

That’s how I learned that he has a lot of insecurities about his phimosis, too.

It made him feel terrible.

But he also didn’t want to take steps to cure the phimosis because he also had some performance worries. He constantly heard people ridicule men who ejaculate quickly. He didn’t want to do anything that could fuck up his delayed ejaculation. He came to think of his phimosis as a kind of sexual secret weapon, and he would rather not come than leave his partner dissatisfied.

So, it turns out he was a big ol’ mess of insecurities, too.

After that realisation, we started owning it. Our sex life is a phimosis and delayed ejaculation sex life, and that’s fine. We work with it.

We take our time. I enjoy jerking him off and sucking his cock even though he won’t finish because I know I’m giving him some of the best sensations he’s ever experienced. I can get fucked without worrying that it will end before I want it to. And he loves that he gets to jerk himself off to completion on my ass after my last orgasm.

Neither of us are complaining, but he’s still taking steps to cure his phimosis.

I want him to be able to experience more pleasure. I want the sense of accomplishment from making him come. And I’d also love to know what it’s like to finish him off with my mouth.

He can make me come with his tongue and fingers, we can adjust the positions and the ways we fuck, we can use toys. It’s not the phimosis and delayed ejaculation that makes our sex life good, and getting rid of it won’t make it bad.

Partial circumcision is the quickest and surest way to deal with phimosis, but it’s not an option we’re looking into. Not yet, anyway, and maybe not ever.

The other method is to basically stretch out foreskin, preferably with the help of a steroid cream. With time, the foreskin should loosen.

It’s a slow process. He’s been doing stretching exercises for months and still can’t pull back his foreskin when he’s erect. But he has made some progress. Now, he can unsheathe with ease when his cock is soft, and he can get at least a partial erection without any discomfort when his foreskin is retracted.

I’ve got to say, I’m excited by it. I love the way the head of his cock looks when it’s exposed, and I want to see more of it.

In the meantime, we’re having great sex. Better than ever, actually. If his phimosis never gets fully resolved, it won’t matter. I’ll still be satisfied and completely happy with Mr. Austin and his great husband dick.

This story originally appeared on Medium and was republished here with full permission. The feature image used is a stock photo.

Emma Austin is a mum, wife, and writer. She writes about sex, love and everything else that matters to her. You can follow her on Medium @emma.austin.writer