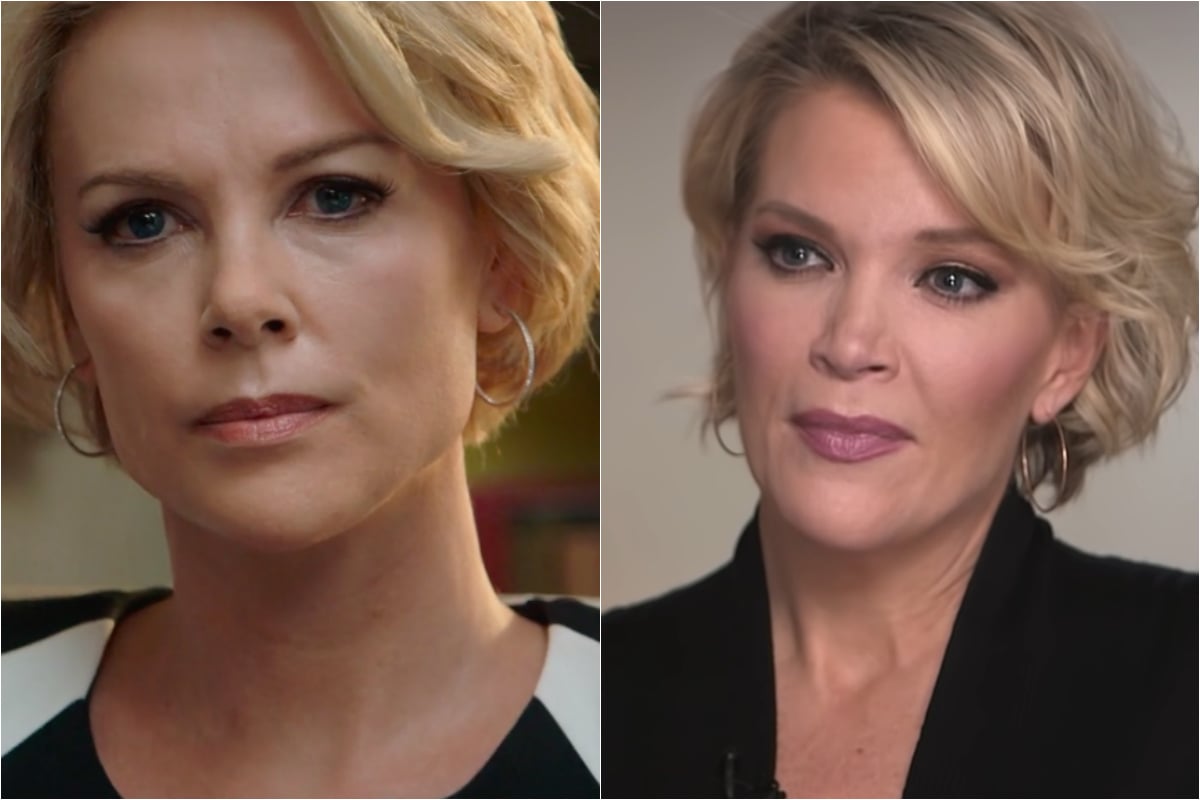 Journalist Megyn Kelly and her former colleagues have shared their thoughts on Bombshell, the new film chronicling the sexual harassment scandal that erupted in 2016 at Fox News.

Megyn Kelly, played by Charlize Theron, is presented as a prominent player in the film’s recounting of the uncovering of Ailes’ perpetual abuse of power, as she too was a victim of sexual harassment at his hands.

Watch the trailer for ‘Bombshell’ here. Post continues below.

Now, Kelly has posted a nearly 30-minute-long video of a round table interview with some of her former colleagues – Juliet Huddy (played by Jennifer Morrison), Rudi Bakhtiar (played by Bakhtiar) and Julie Zann – as they react to the movie.

Here are the five moments the women say the film got both wrong and right.

“It was worse than that.”

When asked for their initial reaction, former associate producer of Fox News Julie Zann – who in real life also experienced sexual harassment before she was fired from the network – was tearful as she recalled: “It was worse than that.”

“That was my immediate takeaway, like, ‘Oh this is it? Wow, you really let Roger off easy.'”

Margot Robbie’s character, who represents an amalgam of various women who worked at the network, is in a meeting with Roger Ailes when he makes sexual advances.

Zann tearfully said this scene was “very close to what happened”, except for one key difference: “I lost my job because I did say ‘no’… He wanted me to ask him to give him oral sex, and I was not going to go there.”

One scene in the film shows Margot Robbie’s character essentially telling Kelly she is partly to blame for Ailes' actions, saying her silence allowed the sexual harassment to continue. The character of Kelly responds: "Look around, snowflake. How do you think I succeeded? How do you think a woman gets a prime-time Fox show?"

Kelly and her colleagues strongly deny this ever happened.

Zann said: "When I watched that scene I thought it was shameful, because it’s unfactual, and it is victim-shaming, and if this is a movie about sexual harassment, this is sending the wrong message. And that is what they don’t have right in this film, is that you [Kelly] were just a real support system.

"And I know that it wasn’t just me [who Kelly supported]. It was for a lot of other people."

During a Republican presidential debate in the lead up to the 2016 US Election, Megyn Kelly made headlines for one of her questions to Donald Trump.

"You've called women you don't like 'fat pigs,' 'dogs,' 'slobs,' and 'disgusting animals.' Does that sound to you like the temperament of a man we should elect as president?" Kelly asked.

"Honestly, Megyn, if you don't like it, I'm sorry, I've been very nice to you, although I could probably maybe not be, based on the way you have treated me," the now-US President responded in part.

This was recounted in Bombshell, and as Kelly said, the film "suggested that I ran my debate question for Trump by the Murdochs".

"That's a fantasy. I never ran it by Ailes, or the Murdochs, or anyone."

Kelly also refuted the perception that Ailes liked the Trump question, saying he didn't "at all".

"He was very angry at me for asking it. And at one point he actually told me, ‘No more female empowerment stuff,'" she recalls.

The film portrayed Ailes' pattern of asking women in his private office to stand up and twirl for him.

This, the former colleagues say, was truly what he did.

"I was asked to twirl, and I did it," Zann shared.

"In retrospect, I’d get anything if I’d said no," Kelly reflected.

Kelly says the scene in which Ailes harasses her in his office was accurate.

The journalist read out diary entries she had from the time, in which she said she felt "powerless".

Writing on the day Ailes kissed her in his office Kelly wrote: "I was in his office. We were hugging goodbye. He kept holding my arms, looking into my eyes and then he kissed me on the lips... So f***ing awkward. I wanted to run out of there.

Bombshell is out in Australian cinemas now.