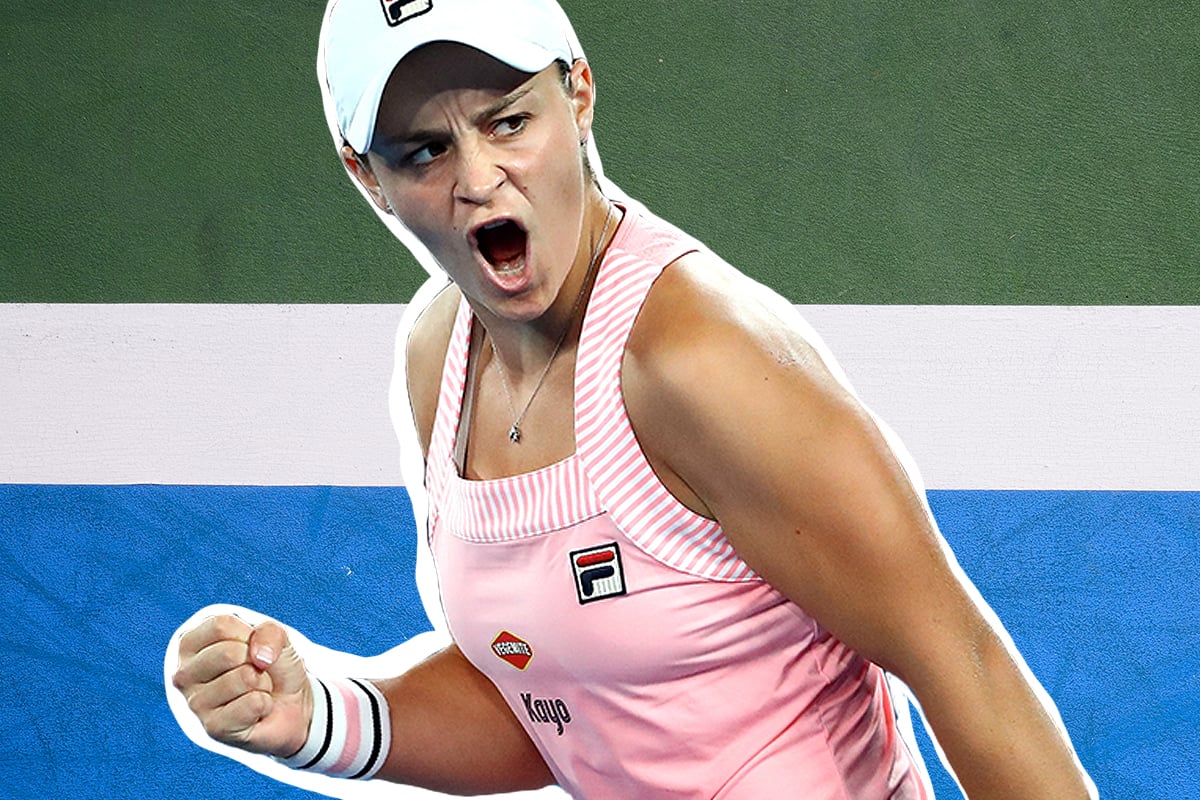 So we’ve been doing this thing.

Australia, collectively, has been doing this thing where we hover.

We’ve been poised to swoop at the first sign of trouble, ready to defend our golden child. Ready to smother her with love and affection if anyone even comes close to not being entirely complimentary.

We just want what’s best for her, y’know?

We want to protect her, support her, make sure she’s being treated well by her peers.

It’s coming from a good place, because we just love her so much.

We didn’t realise we were doing it until we woke up this morning to news from Wimbledon that “our Ash” had lost her fourth-round game.

“The sun’s still going to come up tomorrow,” she said in her post-match interview, causing our top lips to quiver and our hearts to burst with pride.

“It’s a tough one to swallow, but I lost to a better player,” she added.

Goddammit Ash what a gloriously humble thing to say.

We then turned into raging bulls from the pits of hell when we saw what Rafael Nadal had to say about our Ash in his post-match interview.

When a journalist brought up the fact that Nadal had played on centre court, while the world number one women's champ hadn't, Nadal replied, "I am world number two and I won 18 grand slams.

"In the world of tennis today, honestly, my feeling is today I am little bit more than Ashleigh Barty, even if Ashleigh Barty is the first player in the world and she already won in the French Open and she is playing unbelievably good.

“But we can’t create polemics every single day about decisions that they have to take. At the end of the day they have to make a decision.”

But that's when we realised.

If you've ever seen an interview with 23-year-old Ash Barty, she couldn't give two hoots which court she plays on or what people say about her. She's focused on the match at hand and is just thrilled to be there.

It's us who has the problem. We're helicopter parenting Ash Barty - we're overcontrolling, we're overprotective, and we're taking on her success and failures as our own.

Australia, she doesn't need us going in to bat for her when we hear the slightest of possible insults being hurled her way. She's fine.

And the truth is, Nadal wasn't insulting Barty. He was just trying to suggest that the people looking for controversy back off a little.

The same drama went down when Serena Williams dared a) not to know that Barty was number one, and b) called her 'cute' at a pre-Wimbledon press conference over the weekend.

Of course, Barty was fine. But Australia a 'lil bit called Williams an "absolute disgrace" for not knowing more about our Ash, and accused her of being very condescending.

We need to... calm ourselves.

Perhaps we've spent so long pretending troublemakers Nick Kyrious and Bernard Tomic don't belong to us, we now can't help but smother Ash with all our hopes and dreams.

She has everything we've been dreaming of: she's smart, kind, talented, driven, AND WE JUST NEED EVERYONE TO RECOGNISE THAT. ALWAYS.

Somehow we think the dialogue between Ash and her home country might be going something like this:

Australia: "How very dare people like Serena Williams and Rafael Nadal not gush over Ash Barty!

Australia: "It's a disgrace and she deserves someone to stand up for her!"

Ash: "No really I just want to play tennis and I don't want everyone making a fuss."

Australia: "DON'T YOU WORRY ASH WE'LL MAKE SURE NO ONE HURTS YO..."

Look. In hindsight we can see where we went wrong.

But we just got a little... excited.

You keep doing you Ash, we'll just quietly support from the sidelines and try not to embarrass you while you're doing your thing.

Been listening to Ask Me Anything? Take our short survey to win one of four $50 vouchers to our new Lady Startup store.